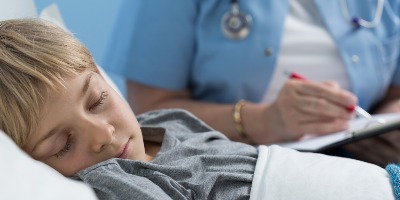 Most people are familiar with the feeling of stress. Your heart may beat faster, your breath could quicken, your blood pressure might rise, and your muscles might tense up. This is called the flight or fight response — what our bodies may do in reacting to being chased by a bear, for example. This reaction improves our ability to survive the stress that is causing it.

PSH (also called neurostorming) is often experienced by patients in the earlier phases of their recovery. For some patients it may only last a couple of hours or a few days, but for others it could occur off and on for months. The severity and length of time of PSH is often consistent with the severity of the brain injury and is often experienced when patients are in the “Disorder of Consciousness” stages of recovery. Some patients may also continue to experience it in the early phases of their delirium as they become more consistently conscious. While this response is experienced more frequently in children than adults, it remains common in adults with severe brain injury

“After a brain injury has happened, it’s important to manage PSH in an effort to protect the physical body as well as the healthier neurons of the brain,” explained Toomey. “That way, when person becomes more conscious, the body is at optimum flexibility, strength, and potential to be successful in rehabilitation.”

Top Ways to Manage Neurostorming
1. Certain medications can help calm the central nervous system, so the body can heal and not become contracted during this phase. Once a patient’s vital signs show improvement, he or she can be slowly weaned off these medications. There is no evidence based way that has been shown in the literature to address PSH, so it is often treated based on the physician’s clinical experience. At Nexus Children’s Hospital, we monitor the patient’s vital signs, including with a continuous cardiac monitor, which are often a strong indicator of how the patient is improving from the acute injury.

2. The symptoms of PSH can also mimic those of other serious complications, including acute infection. Since brain injured patients have an increased risk of infection due to stresses placed on their body from their injury, they should be screened for infection when significantly elevated temperatures are seen.

3. Enable a patient to heal on his or her own during medically induced sleep sessions. In addition to managing neurostorming symptoms, establishing a sleep/wake cycle can help a patient progress. Dr. Toomey explains it’s important to give credit to the body’s inherent healing techniques, including the consolidated and slower brain waves of sleep.

“I ask families to remember how they felt when they were sleep deprived when caring for a young infant,” said Toomey. “If we consider how poorly we functioned at that time of little sleep, then it is easier to understand why the person in PSH has trouble managing their physical responsibilities. He or she can’t sustain restorative sleep patterns with a severely injured and inflamed brain.”

Dr. Toomey goes on to explain, “It’s important to realize that, while it’s difficult to see a loved one in PSH, it is a typical physiological response to rapidly compensate for the effects of the injury. Although the response can generally help a person, the extreme of the response and time that a person remains in this state can cause further brain damage and destruction of future potential. As the body physiologically recovers from the severe inflammation of the injured brain and the patient becomes more consistently conscious, his or her body and brain comes back ‘online’ and can physiologically inhibit PSH for the themselves again without medication assistance.”

Nexus Children’s Hospital treats over 60 children and adolescents with severe brain injuries per year. Their clinical team is experienced at managing severely injured patients, and PSH is one common challenge they treat.

“Our team feels very confident in the way we approach PSH,” said Toomey. “Everything we do is aimed at maintaining a patient’s future potential and is consistent for what their body can manage at that time in their recovery.”